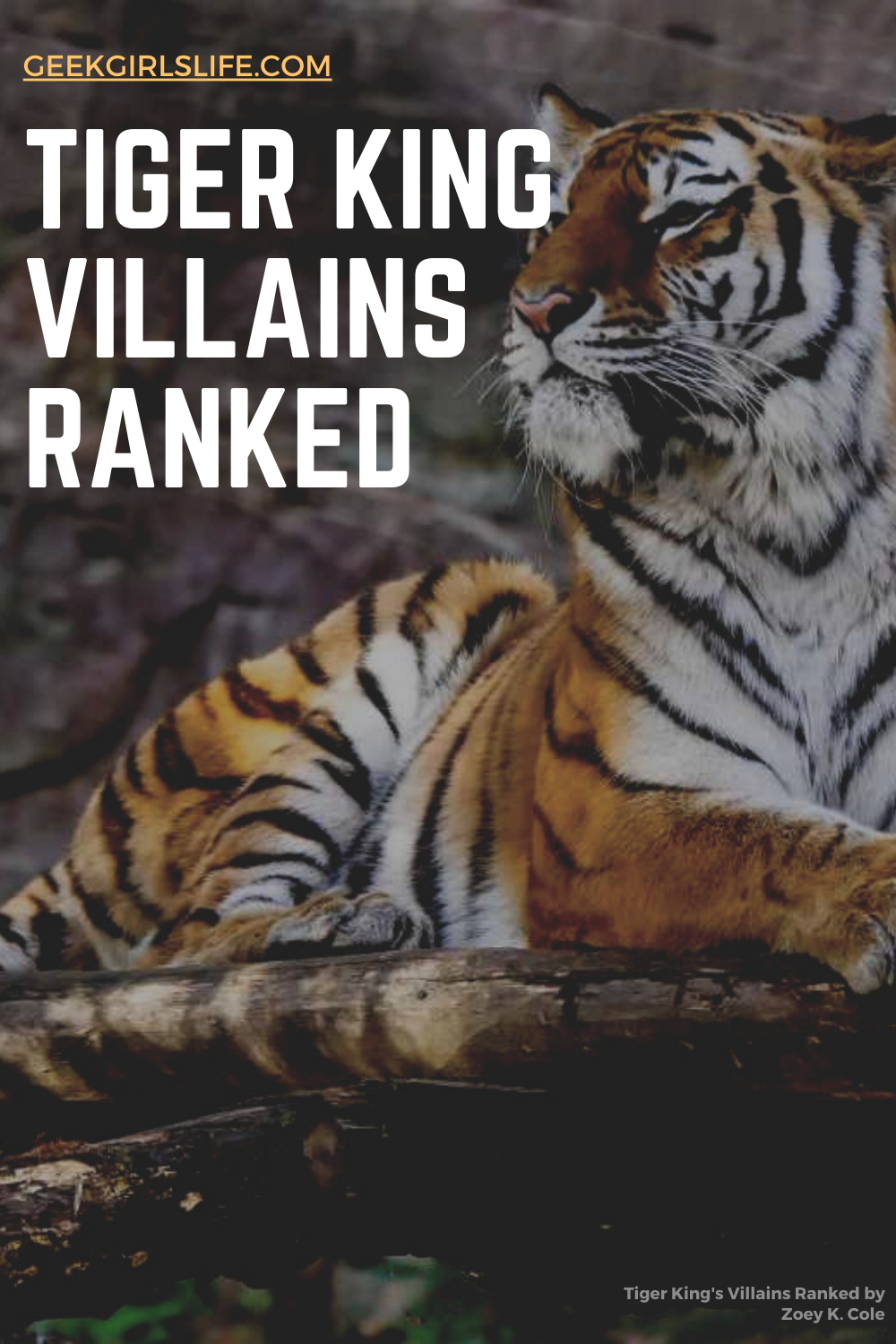 Affiliate Link Disclosure: We may earn a small commission from qualifying purchases we've (affiliate) linked to on our site. We only recommend products that we have personally used, are highly recommended and that we are passionate about sharing with our readers.

If you haven’t heard of Netflix’s Tiger King by now you are successfully living off the grid. I am obsessed. Joe Exotic and Carole Baskin’s Big Cat frenemy war is my favorite quarantine pastime. Throughout the series my anger shifts from person to person with every episode. Here are Tiger King’s Biggest Villains ranked.

The following list is strictly my opinion and all presumed crimes are alleged. Everyone is presumed innocent until proven otherwise by a court of law.

One of the more rational cast of characters throughout the series. Kirkham acts as a storyteller by helping the audience weave together this eccentric tale of tigers, polygamy, cults, and murder. Why did he make the list?

Aside from his cowboy get up and chain-smoking monologues I would say that he helped fluff up Joe Exotic’s ego while gaining footage for a reality show he was shopping. Yes, this was his job and he did it well. This series is entertaining but also runs rampant with drug use and undiagnosed mental health issues.

After a fire burned down the production studio, Joe Exotic claimed Kirkham was to blame in a bizarre arson for hire plot from Carole Baskin. I sincerely doubt Kirkham would burn down all his hard work.

Who should play him in a movie? Billy Bob Thornton

Attorney to the presumed dead, Don Lewis. I found it difficult to take him seriously with his colorful polka-dotted, clown inspired tie. I don’t know what you call the opposite of a power tie, but that’s it. He seemed kind of clueless and unresearched in several of his scenes. I got a vibe that he knew more than he let on about Don Lewis. He looked confused when presented with Carole Baskin’s Will. Was it me or did he seemed unmoved by the “disappearance” verbiage in the Will?

Maybe he was so pointless because of attorney-client privilege. He had very little value to the documentary accept when he refuted Carole’s claims that Don had deteriorated mental capacity. Anyway, I got a vibe he knew more.

Who should play him in a movie? Beau Bridges

You know this list is crazy when the real-life version of Tony Montana is only at number 8. Sure, he watched a man get chopped up with a saw and was a notorious drug kingpin but other than that he was very likable. But I also wouldn’t want to cross him. After serving his time and winning his appeal he got back into the exotic animal game. But mostly stayed out of all the drama between Carole, Joe, and Doc.

Who should play him in a movie? John Leguizamo

Part of me feels bad for him the other part wants me to tell him to grow a spine. He’s Carole Baskin’s current husband. Half the time he comes across as a submissive being held captive in his marriage. I mean he dressed up in cat gear and let Carole walk him around on a lease. The other half of the time he goes hard at Joe Exotic. Throughout the docuseries, he spearheads lawsuits against Joe Exotic and constantly acts like his wife is sweet and innocent.

Check out this YouTube clip of Howard speaking about accusations in Tiger King.

He goes after Joe Exotic and the producers of the documentary. He doubles down defending his wife, while having no spine what so ever. Howard has a lot to say about the disappearance of Don Lewis, considering he didn’t even know Don.

He and Carole went hard after Joe, even trying to take the houses from Joe’s elderly parents. Yes, it was legal, but was unnecessary and cruel. Either way, Howard seems to be a ride or die husband, and I can see why Carole is married to him.

Who should play him in a movie? Stephen Merchant

Joe’s biggest fault is he is a shitty businessman. On the surface, he has a big heart for animals and husbands but he never quite figured out how to parlay his eccentric showmanship into wealth. Joe made a myriad of threats to Carole but didn’t know how to fight back without losing his shit and all his money.

Exotic is a gun-toting, explosive loving, sparkle shirt-wearing guy. During the series, he wed 2 dudes who were self-proclaimed straight; in a weird Stockholm syndrome marriage with drugs and exotic animals. One husband got a woman pregnant and left Joe, the other died in a suicide/accidental shooting. Two months after his death Joe married another young man.

Convicted felons helped run the Zoo. Joe hired ex-cons who couldn’t find work or housing and helped them out. An incredible gesture on the surface, but he also exploited these young men and women by paying them very low wages.

Joe has a lot of faults, but do I think he’s guilty of the murder for hire plot? No.

Who should play him in a movie? Woody Harrelson

The Eye of the Tiger jet ski scene was enough to get him on my list after I finished eye-rolling. He informed on Joe to the FBI in order to avoid a laundry list of his own charges. James is a snitch and the entire plot seemed very suspect.

Garretson recorded conversations and introduced Joe to an undercover agent posing as a professional murderer. Garretson involvement seemed more revenge oriented while simultaneously getting himself out of trouble.

Who should play him in a movie? Eric Stonestreet

Unfortunately, Glover was Jeff Lowe’s pawn throughout the docuseries. Glover reportedly dropped out of school in the 6 grade and has a lengthy list of felony convictions throughout his life. Glover sports a teardrop tattoo, which has long been a symbol that you’ve murdered someone. However, Glover claims the tattoo is his way of mourning a loved one who passed away. I guess he didn’t get the memo on the teardrop.

Where was I? Ah yes, Glover states that he agreed to kill Carole Baskin for the minimal fee of $3,000. The fee alone is suspicious, but I don’t know much about hiring a murderer but I would imagine it’s costly. Joe responds explaining that Jeff Lowe ordered him to give Glover the money, which really does make it look like entrapment. Any lawyers reading this? What are your thoughts?

The series uploaded recorded phone calls between Jeff and Allen, which conflict with Allen’s testimony in Joe’s trial. How is this not perjury?

Also, I just can’t with the bathtub scene.

Who should play him in a movie? Chris Bauer

The “angel investor” who appeared out of nowhere put Joe into a trance with his flashy lifestyle. And like so many Big Cat owners in this series he is lives a polyamory lifestyle with younger girlfriend Lauren.

Where to begin, he stuffed baby tigers in suitcases on his trips to Las Vegas. Lowe also ran a party bus where you can pet cubs, because drunk adults, wild animals, and small spaces are always a great idea.

Lowe swindled Joe into signing over the zoo to him. Yes, Joe was wrong to trust Lowe, and it was a bad move to do this. Did anyone else feel like Lowe was a conman who appeared to target Joe? I mean he appeared at just the right time.

Phone call recordings appear to show him coercing Glover to entrap Joe in order to get himself out of hot water. If Lowe tells the story, he took over the Zoo and saved the animals, I’m not buying this, at all. I look forward to more follow up.

Who should play him in a movie? Dean Norris

I struggled deciding who should be number one. Doc boasts about appearances on late-night TV and working with Britney Spears but digging a little deeper you learn he may himself be a predator (allegedly).

Former employee, Barbra Fisher, tells a tale of what it’s like to work for Doc. He has multiple wives who all started working for him as “young women”. Queue the R. Kelly music.

Fisher explains reluctantly agreeing to breast implants because she got to have a few days off. She also claimed that Doc would suggest he heals people through his penis. Doc denies all claims he is running a cult.

Who should play him in a movie? Will Farrell

Owner of Big Cat Rescue and nemesis of Joe Exotic. She was often the target of Joe’s online threats. She often fought back with lawsuits While her demeanor throughout the series was cute and innocent, I think there may be more going on.

Joe Exotic and I agree on one thing, Carole Baskin could write a master class on marketing. She’s that good.

Instead of hiring staff, it appears Carole runs Big Cat Rescue with volunteers who work for free. She laughed about not knowing a lot of the volunteers’ names. Carole convinced them that she’s saving tigers but Joe Exotic is harming them. We learn Carole bred and tried to domesticate these animals in her past as well. In fact, a lot of the abuses she claims Joe was doing, she did as well in the documentary. Maybe she learned her lesson and really wanted to help others?

Carole spoke in length about how keeping Big Cats in cages is inhumane all how she gave an interview while standing in front of a big cat in a cage.

She met her late husband, Don Lewis, while walking the street one night, side-eye, does this mean she was hooking?

Multiple people alleged that Carole killed her ex-husband Don Lewis. She claimed he showed signs of dementia and that maybe he crashed a plane and disappeared. She presented a shady Will that said she was entitled to 90% of his wealth if he disappeared. I’m no expert but aren’t Will’s typically for what happens after you die?

Don’s daughters claimed they were frightened of Carole. We learn Don Lewis tried to get a restraining order on Carole before he disappeared. According to the U.S. Sun, Carole dated a man after Don’s disappearance, but before her marriage to Howard, his name Jay Baykal.

According to the US Sun, Jay Baykal also attempted to get a restraining order against Carole after she allegedly stated “Dead bodies don’t talk”, when being pressed about what happened to Don. Check out that article here

During the Tiger King documentary, Carole Baskin offered up some interesting information when asked why a tiger attacked Joe Exotic. She said sardine oil would need to be rubbed on his shoes to get a big cat to attack him. Maybe that’s just a fact, but all it made me think about was poor Don Lewis.

Carole just rubbed me the wrong way. Carole made the hair on the back of my neck stand up. I think there is more to her story, I’m hoping we hear more about Don Lewis in the future as well. Carole Baskin denies any and all wrong doing at Big Cat Rescue and the disappearance of Don Lewis.

Feel free to check out her Big Cat Rescue page for more info.

Who would play her in a movie? Kim Basinger

Did we miss anyone? Sound off in the comments, we’d love to here your thoughts? Also, don’t forget to follow us on Facebook.

Like Loading...
(As an Amazon Associate I earn from qualifying purchases).
All articles are strictly the opinions of the writer based on his or her experiences in life. If you have questions or are unsure of anything regarding your health we strongly advise you to contact a professional for all medical advice.

This site uses Akismet to reduce spam. Learn how your comment data is processed. 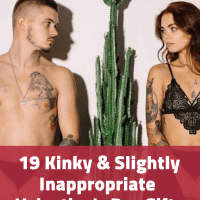 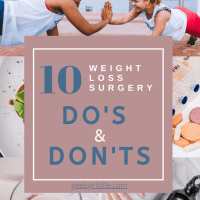 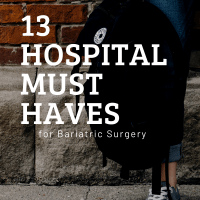 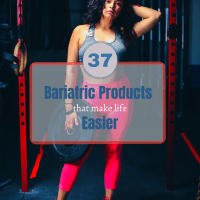